JERSEY CITY, N.J., June 02, 2021 (GLOBE NEWSWIRE) -- SCYNEXIS, Inc. (NASDAQ: SCYX), a biotechnology company pioneering innovative medicines to overcome and prevent difficult-to-treat and drug-resistant fungal infections, today announced that the U.S. Food and Drug Administration (FDA) has approved BREXAFEMME® (ibrexafungerp tablets), for oral use in patients with vulvovaginal candidiasis (VVC), also known as vaginal yeast infection. BREXAFEMME, which represents the first approved drug in a novel antifungal class in more than 20 years, was approved based on positive results from two Phase 3 studies in which oral ibrexafungerp demonstrated efficacy and a favorable tolerability profile in women with VVC. SCYNEXIS has partnered with Amplity Health, a leading global contract commercialization organization, to support U.S. commercialization of BREXAFEMME, with commercial launch scheduled in the second half of this year.

“The FDA approval of BREXAFEMME is the culmination of years of work and a significant milestone for SCYNEXIS, marking our evolution to a commercial-stage antifungal company. We are pleased with the approved label, highlighting the unique attributes of BREXAFEMME, and thrilled to be able to offer a new treatment option to women with vaginal yeast infections,” said Marco Taglietti, M.D., President and Chief Executive Officer of SCYNEXIS. “We believe ibrexafungerp has significant commercial potential. This first approval in the U.S. is a major step towards building the ibrexafungerp antifungal franchise as we intend to leverage an extended 10-year period of regulatory exclusivity and 14 years of patent protection. We are in a strong financial position to execute on our commercial plans and are committed to advancing our hospital programs to maximize the broad potential of this novel therapeutic class to help patients with serious and often resistant fungal infections.”

David Angulo, M.D., Chief Medical Officer of SCYNEXIS, added, “We are pleased to bring this much needed innovation to the antifungal field and to offer a new one-day oral antifungal treatment for vaginal yeast infections to millions of women who could benefit from a new therapeutic option. BREXAFEMME has a differentiated fungicidal mechanism of action that kills a broad range of Candida species, including azole-resistant strains. We are working on completing our CANDLE study investigating ibrexafungerp for the prevention of recurrent VVC and expect we will be submitting a supplemental NDA in the first half of 2022. We thank all the clinical investigators and patients who participated in our VANISH clinical trials who made this significant advancement possible.”

Ibrexafungerp benefits from both Qualified Infectious Disease Product (QIDP) and Fast Track designations granted by the FDA for the treatment of VVC and prevention of recurrent VVC. Under QIDP designation, BREXAFEMME is expected to receive ten years of market exclusivity in the U.S.: five years of new chemical entity exclusivity plus five additional years of exclusivity extension due to the QIDP designation. BREXAFEMME is also protected by multiple patents, including a composition-of-matter patent covering the ibrexafungerp molecule. With patent term extension, this patent is expected to expire in 2035, providing 14 years of protection in the U.S.

SCYNEXIS plans to also discuss its commercial plans at a virtual Investor Day to be held on June 29th.

About Vulvovaginal Candidiasis
VVC, commonly known as a vaginal yeast infection due to Candida, is the second most common cause of vaginitis. Although these infections are frequently caused by Candida albicans, infections caused by fluconazole-resistant and non-albicans Candida strains, such as Candida glabrata, have been reported to be on the rise. VVC can be associated with substantial morbidity, including significant genital discomfort (pain, itching, burning), reduced sexual pleasure and activity, psychological distress (stress, depression, anxiety), embarrassment, reduced physical activity, and loss of productivity. Typical VVC symptoms include pruritus, vaginal soreness, irritation, excoriation of vaginal mucosa and abnormal vaginal discharge. An estimated 70-75% of women worldwide will have at least one episode of VVC in their lifetime, and 40-50% of them will experience multiple episodes.

Currently approved treatments for VVC include BREXAFEMME (ibrexafungerp tablets), several topical antifungals, and oral fluconazole, which is the only other orally administered antifungal approved for the treatment of VVC in the U.S. and which has typically accounted for over 90% of the prescriptions written for this condition every year.

About BREXAFEMME® (ibrexafungerp tablets), for oral use
BREXAFEMME is the trade name for ibrexafungerp, a novel oral antifungal approved for the treatment of vulvovaginal candidiasis (VVC), also known as vaginal yeast infection. Its mechanism of action, glucan synthase inhibition, is fungicidal against Candida species, meaning it kills fungal cells. The New Drug Application (NDA) for BREXAFEMME was approved by the U.S. Food and Drug Administration (FDA) on June 1, 2021. The NDA was supported by positive results from two Phase 3, randomized, double-blind, placebo-controlled, multi-center studies (VANISH-303 and VANISH-306), in which oral ibrexafungerp demonstrated efficacy and a favorable tolerability profile in women with VVC. BREXAFEMME represents the first approved drug in a new antifungal class in over 20 years and is the first and only treatment for vaginal yeast infections which is both oral and non-azole. For more information, visit www.brexafemme.com.

Indication
BREXAFEMME® is a triterpenoid antifungal indicated for the treatment of adult and postmenarchal pediatric females with vulvovaginal candidiasis (VVC).

Dosage and Administration
The recommended dosage of BREXAFEMME is 300 mg (two tablets of 150 mg) twice a day for one day, for a total treatment dosage of 600 mg. BREXAFEMME may be taken with or without food.

About SCYNEXIS
SCYNEXIS, Inc. (NASDAQ: SCYX) is a biotechnology company pioneering innovative medicines to help millions of patients worldwide overcome and prevent difficult-to-treat infections that are becoming increasingly drug-resistant. We are developing our lead asset, ibrexafungerp (formerly known as SCY-078), as a broad-spectrum, systemic antifungal for multiple fungal indications in both the community and hospital settings. The New Drug Application (NDA) for BREXAFEMME® (ibrexafungerp tablets) was approved by the U.S. Food and Drug Administration (FDA) on June 1, 2021. For more information, visit www.brexafemme.com. We are also continuing late-stage clinical development of ibrexafungerp for the prevention of recurrent VVC as well as the treatment of life-threatening invasive fungal infections in hospitalized patients. For more information, visit www.scynexis.com.

Forward-Looking Statements
Statements contained in this press release regarding expected future events or results are "forward-looking statements" within the meaning of the Private Securities Litigation Reform Act of 1995, including but not limited to statements regarding: the commercial launch of BREXAFEMME is scheduled in the second half of 2021; the commercial potential for ibrexafungerp; expected duration of commercial exclusivity; SCYNEXIS’ financial position will enable it to execute on its commercial plans; and SCYNEXIS’ expectation that it will be submitting a supplemental NDA in the first half of 2022 for the use of BREXAFEMME for the prevention of recurrent VVC. Because such statements are subject to risks and uncertainties, actual results may differ materially from those expressed or implied by such forward-looking statements. These risks and uncertainties include, but are not limited, to: BREXAFEMME may not be accepted by physicians and patients at the rate SCYNEXIS expects; risks inherent in SCYNEXIS' ability to successfully develop and obtain FDA approval for ibrexafungerp for additional indications; unexpected delays may occur in the timing of acceptance by the FDA of an NDA submission; the expected costs of studies and when they might begin or be concluded; SCYNEXIS’ need for additional capital resources; and SCYNEXIS' reliance on third parties to conduct SCYNEXIS' clinical studies and commercialize its products. These and other risks are described more fully in SCYNEXIS' filings with the Securities and Exchange Commission, including without limitation, its most recent Annual Report on Form 10-K and Quarterly Report on Form 10-Q, including in each case under the caption "Risk Factors," and in other documents subsequently filed with or furnished to the Securities and Exchange Commission. All forward-looking statements contained in this press release speak only as of the date on which they were made. SCYNEXIS undertakes no obligation to update such statements to reflect events that occur or circumstances that exist after the date on which they were made.

BREXAFEMME® (ibrexafungerp tablets), for oral use 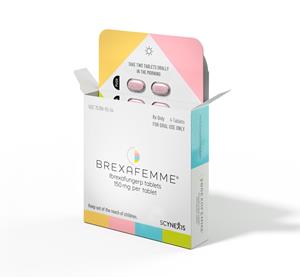